The Golden era of the period between the two World Wars, roaring parties, grand style madness… all symbolized by this Edge Profile which, like its sister N°07 announces the rage of “Art Déco”.
This frenzy is created by the way the N°8 reflects the lights and the colours of a room. It matches the spirit of one of the temples of the new Parisian “Bistronomie”; “L’Ami Jean”. Formerly with Christian Constant at the mythical “Le Crillon” palace hotel, place de la Concorde and with Yves Camdeborde at “La Régalade”, Stéphane Jégo is considered a sort of druid of the new French cuisine. All the produce are exceptional, the changing menu incarnates finesse, and the different courses go from a reassuring tradition to magical creations. The atmosphere is Bistro-like: unpretentious, generous, relaxed.
This Edge Profile calls for presence at the bar. The same atmosphere can be found at “Soif” (7 Battersea Rise, London): half restaurant and half wine bar. The emphasis is made on the “truth of the produce”. The extensive wine menu is made of small producers from around the world, and perfectly matches the delightful Mediterranean cuisine. One can quench one’s thirst (“soif”) and enjoy a nice dinner at the bar, in a lively atmosphere. The success of “Soif” lies with the noise of the glasses that are raised from our pewter counter top, for every toasts that are brought each evening. 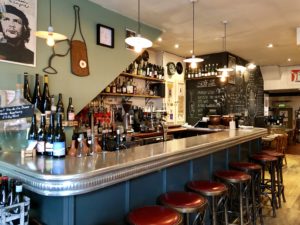 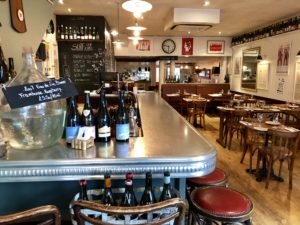